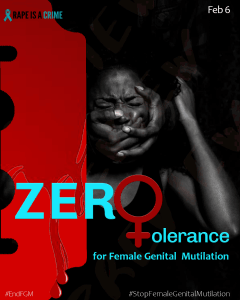 In passage ways leading to abattoirs disguised as sacred rooms

Girls like me are carried through by those before us

A celebration of life and womanhood

With instruments of death wrapped in old wrappers

rusty blades and knives and glasses

You begin to wonder what life lies in this

as mouths begin to chew on soft cloths,

hands are held back by trusted aunties, and legs are spread apart like sheets.

–Excerpts from a spoken word on FGM by Global Rights

Cultural practice, family honor, vaginal purity amongst others is some of the reasons proponents of Female Genital Mutilation (FGM) stipulate to be the rationale for their continuation of this anachronistic practice. However, on a closer inspection, the underlying truth remains that for time immemorial, a woman’s body ha perceived as a communal property upon which communal decisions are made.  Female Genital Mutilation is a barbaric and medieval practice that involves a process that alters or injures the female genital areas for none medical reasons. This brutal process has been adjudged to be an affront to the human rights and dignity of women and girls.

Still active in 30 countries around the world (27 African countries, Indonesia, Iraqi Kurdistan, and Yemen), the practice is done by either a traditional circumciser, a religious leader or a local elder using sharp objects like a blade in the partial or total removal of the clitoral gland or in more severe cases the partial closure of the vaginal opening with the creation of an artificial seal. This process known as infibulation accounts for an approximately 15% of total FGM cases worldwide and has the added risk of severely placing the person’s life in danger[1]. This harmful cultural practice is often seen as a rite of passage amongst many communities. Genital infibulation is one of the most severe forms of female genital mutilation which causes severe trauma to the woman’s genitals. Infibulated women are expected to undergo this trauma on the night before their wedding as the genital area is unsealed in a process known as de-fibulation to allow for sexual encounters with the husband and childbirth. Interestingly, the debate about the import of female genital mutilation has carried on for generations without the consent of women who are at the receiving end of this noxious practice. A study on Re-infibulation (the process of being infibulated after childbirth or after previously being de-infibulated), showed that social pressure, particularly from older women, has a great influence on the decision to re-infibulate. Many of the young women said that the re-infibulation was decided on by the midwife, or by the midwife together with the mother or other female relatives. Many said that the re-infibulation was done without their consent.[2].

It is approximated that some 200 million women and girls around the world have undergone some form of female genital mutilation[3], with Nigeria accounting for 10% of this number despite the fact that the international community has flagged it off as a human rights violation. The prevalenceof the FGM in Nigeria varies form one geopolitical zone to the other, with some authors quoting its prevalence as  2.9% in the South-East, 20.7% in the North-West, 9.9% in the Northcentral, 25.8% in the South-South, 49.0% in the South East, and 47.5% in the South-West. Some hotspots with very high prevalence are also documented in different geopolitical zones in Nigeria: Osun 76.6% (Southwest), Ebonyi 74% (South East), Ekiti State 72.3% (South-West), Imo State 68% (South-East), and Oyo State 65.6% (Southwest)[4].The effect of migration from Africa and the Middle East to parts of Europe, Australia and New Zealand have seen the practice of FGM spread amongst migrant communities within the regions.

There have been cultural and religious believes that attributes FGM to feminine ideals and modesty. The clitoral gland has often been regarded as masculine or an unformed penis, therefore in its total removal, many believe that a woman achieves her full feminine beauty. This has been disapproved by the medical community.  In certain societies where the practice abounds, FGM is often regarded as a prerequisite for marriage. It is imperative to note that the support for the practice amongst women can be attributed to generations of indoctrination and social pressure and is partly the reason why the practice continues to this day. As FGM is considered a rite of passage from girlhood to womanhood, many communities timing for performing FGM differs. The practice is commonly done several weeks after birth although a timeline of 1-4 or 12-15 have been adopted by tribes within Central Africa and may also be performed on adult women prior to marriage as have been the case within the Igbo tribe in Nigeria.

It is unquestioning that the practices of FGM constitutes parts of gender-based violence and serves as a way of oppressing woman in many cultures through propagating beliefs in what can be termed or considered as acceptable sexual behaviors amongst women. By reducing the woman’s libido many communities believe that this helps prevent the woman from engaging in extramarital activities. The intense policing of a woman’s body often leaves many women living a rigid life, afraid of the societal implications of non-conformity. A woman’s body is, therefore, the vehicle upon which many communal discussions have been had and many barbaric practices developed for the “communal good” but never has the canvas upon which these societal ills are been painted, been required to give their opinions about these communal intrusions.  As we all know, societal pressure often puts the onus of responsibility on the woman to maintain sexual decorum without attributing these same levels of responsibility to the male sex.

The detrimental impact of FGM is vast. The medical effects can be split in between physical and psychological harm. Immediate complications arising from FGM may include Severe pain, genital swelling, fever, tetanus infections, urinary problems, death amongst others[5]. The long-term medical effects have been reported to include scar tissue, vaginal problems such as discharge, itching, sexual problems involving painful sexual experiences and/or decreased sexual satisfaction. Additionally, many women have had experiences dealing with psychological trauma in the forms of depression, anxiety, post-traumatic stress disorder, low self-esteem directly resulting from is abuse.

It, therefore, begs the question why the practice continues to thrive in spite of advocacy and modern medical efforts to stem the spread.

The cultural reductionism of a woman to her relationship with men gives importance to the practice of FGM vis-à-vis the increased marriageability status of the woman. Further gloss up in the notion, is the somewhat “specialty” given to the ceremony making it highly desirable. The participants may be sequestered and given special foods and clothes. A communal meal for women might be served, during which an oral history of domestic life, the expected role of the adult woman, and information about women’s secret societies are shared[6]. Experts have attributed this communal aspect as partly the reason for the stall in achieving zero tolerance to FGM. The road to achieving zero tolerance for FGM is closely linked in this writer’s opinion to the discussion of gender equality, reversing gender norms and practices, we can curb some of the myths that have so far continued to stand as founding blocks for these harmful practices. By doing away with theory of reductionism where the sum total of a woman’s value is seen through the lens of her relationship to a man as in marriage and inculcating the understanding that a woman’s body is hers and hers alone to do as she sees feet, we can ensure that women and girls need no longer be subjected to is grotesque human rights abuse. Achieving zero tolerance to FGM requires a collective abandonment of harmful cultural practice regardless of how dressed up it may appear in ethnic and cultural garb. Her body is hers, not a crime scene. End Female Genital Mutilation!

[4] Female Genital Mutilation: Culture, Religion, and medicalization, where do we direct our search light for eradication: Nigeria as a case study